Bill Stone started SS&C in 1986 with $20,000 of his savings to provide bookkeeping software to the financial industry. After 34 years, going public twice, and more than 50 acquisitions, SS&C now earns $4.6 billion in annual revenues and over $1.2 billion in free cash flows. Over this period, the stock has vastly outperformed the market. Stone achieved these results not just by acquiring the right companies in a great industry, but also by embedding a mentality of ownership into these newly controlled assets.

When SS&C acquired Advent in 2015 for $2.7 billion, Stone saw a company that provided mission-critical software to the financial industry. However, Advent lacked the structure and culture that could drive extraordinary results. Stone shared with investors what he said to Advent CEO Pete Hess:

“Excuse me, Pete, you're running a business about $400 million in revenue. You got about 1,250 people, and the only person in this company that has a P&L is you.’ I said, that’s a bad way to run a railroad. At SS&C, there’s probably 40 or 50 P&Ls. And I figured out that if everybody hits their P&L, when they add them up, I’ve hit my P&L. So you have to distribute the responsibility and the accountability down through the organization.”

At the time of the acquisition, Advent had $130 million in EBITDA at a 33% margin. Fast forward just 1.5 years later, Advent had increased its margins to 48% under SS&C’s ownership. In addition to the typical G&A savings found in acquisitions, SS&C improved margins by adding ownership and responsibility to key Advent managers, Rob Roley and Dave Welling. Stone describes the old Advent:

“Before, Advent had a matrix into the salesforce, so neither Rob nor Dave would run their own salesforce. That was run by another [guy] named Chris Momsen. So Chris could decide who got sales resources and who didn’t. But if you run a business for me, I can assure you, … You’re responsible for revenue. You’re not just responsible for expenses.”

After giving Rob and Dave full P&L and revenue responsibilities, they could now hire their own sales people, incent them as they saw fit, and price their products as they wanted. “Once you get businesses aligned correctly, you get people motivated that know they can make more money,” Stone has said. “They know they’re in charge of their own destiny.”

Another company SS&C transformed is DST, a provider of technology-based information processing and servicing solutions. When SS&C acquired DST in 2018 for $5.4 billion, they found a company where only a small percentage of employees had equity ownership, and thus little incentive to produce excellent results. The most meaningful change at DST was, again, creating a culture of ownership.

“Within 60 days of buying DST, we granted options to 6,881 people. Prior to that, they had 300 people out of their 14,400 employees that were eligible for equity. We moved bonuses. They had 800 people available for their bonus pool. We moved it to 10,000. The only people not eligible for a bonus get paid 1.5x for overtime. So we're not just sticks, we're also carrots, right? And we’re trying to bring the wealth that has been created in SS&C to get shared across the entire organization, and that's worked really well.”

Yet another example of incentivizing employees and making sure they have skin in the game is when SS&C acquired GlobeOp. This company had 2,100 employees in India. Only 3 had options. SS&C made sure over 75% of those  in India had options, some of whom now have equity in those options that are 3x–5x what they earn in a year. Here’s what Stone said about creating an ownership culture where one didn’t exist before:

By properly incentivizing people, giving them responsibility, and making it easier to do their jobs, Stone has created an environment where people are “driving themselves rather than us in our ivory tower trying to come down with an oracle here and there.” Stone believes it’s his job to always be talking with current and potential customers, not micro-managing:

“We go out and try to win deals. We get on the phone. And that’s what we think is our business. We’re not run-the-company people. We’re not the corporate types that are up in our offices, gazing out, thinking great thoughts… We go out every day and try to close business. We’re a very high-margin company. If we get sales, life works.” 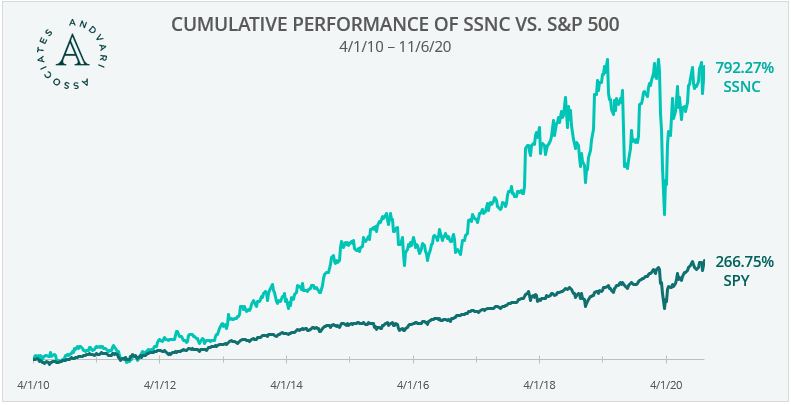 SS&C checks off many of the qualitative boxes on Andvari’s list. Bill Stone, the founder, is still running the business after more than 30 years. He still owns 13.3% of SS&C which now has a market cap of $16.5 billion. He has an extraordinary track record of capital allocation (including demonstrating talent as a serial acquirer, which we value). He is an intense operator and has created a culture that retains and attracts highly motivated people.

In the words of Savneet Singh, CEO of PAR Tech whom Andvari interviewed a month ago, Stone has created a culture of owners, not renters. This has worked extremely well for SS&C shareholders who have earned over 790% since the company’s second IPO in 2010.

Once every two weeks, Andvari shares insights on great companies, exceptional leaders in business, and related topics in a digestible email format. Click here to sign-up.