Continuing on from our prior post about Larry Bossidy turning Allied Signal around into a near 10-bagger in less than 10 years, we now look at another company that instilled a unique culture that enabled powerful results over the long-term.

The servant leadership culture at Waste Connections (WCN) is a compelling case study for its effectiveness in empowering employees. This concept also allowed WCN to continue its rapid growth via consolidation of the solid waste industry. WCN shareholders since 2004 have enjoyed 10-bagger returns. 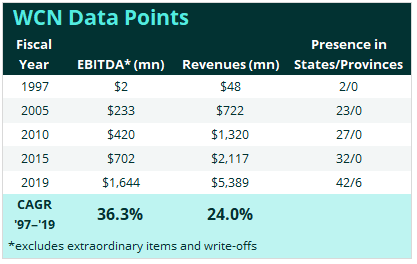 Ron Mittelstaedt founded WCN in 1997 and grew it to be the fourth-largest solid waste company in the United States in just several years. Similar to Bossidy, Mittelstaedt faced a crisis as he scaled the business that he believed could derail its long-term success. WCN had a perilously high turnover rate for its employees. Over 40% of employees were leaving each year with about 80% of them leaving voluntarily. Without a more stable base of employees, Mittelstaedt believed it would be too costly and reckless for WCN to continue on its aggressive growth path.

To diagnose the problem, management began looking back at several years of exit surveys. WCN learned its managers had simply failed their employees:

More than two thousand survey respondents spelled out the problem: their leaders had failed them. Forty-five percent of those surveyed said they could not have a candid conversation with their manager. An equal number said they were not doing the work they had been hired to do.

In 2004, Mittelstaedt met Ken Blanchard, the best-selling author of The One-Minute Manager and The Servant Leader. He saw the potential benefits of servant leadership and began to instill a culture based around those ideas beginning in 2005. From the book Servant Leadership in Action, this concept “turns the traditional leadership pyramid upside down, placing leaders at the bottom so that they can serve the employees at the top.” In other words, “The servant leader’s role is to help others succeed—to serve, not be served.”

After achieving buy-in from 90% of WCN managers by 2008, Mittelstaedt moved to a mandatory, company-wide servant leadership policy. Buy-in was no longer optional. Similar to Bossidy’s emphasis on comprehensive employee acceptance of ‘total quality’ at Allied Signal, Mittelstaedt knew this was a crossroads for WCN. He would soon be deciding whether to keep or fire high performing managers who didn’t embrace the culture.

In one case, a division vice president at WCN was performing highly and seemed to embrace servant leadership. However, employee surveys described that same individual as someone who was egotistical and hypocritical. Mittelstaedt fired this vice president and over a dozen others like him.

Servant leadership is “not about what your boss thinks of you; it’s about what your people think of their boss,” said Mittelstaedt. He continued, “If we have a cancer in our culture, we have to cut it out.” 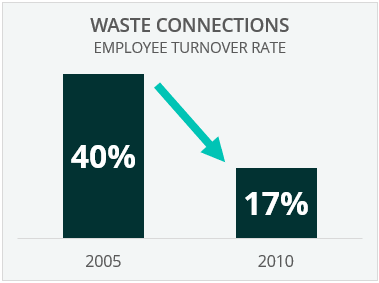 The results of WCN’s cultural transformation were stark. By the end of 2010, annual turnover had improved from 40% to 17%. Of that, 56% was voluntary instead of 80%. Safety incident rates were down by 40%. Most importantly, according to WCN’s now-retired  President Steven Bouck, “Servant leadership made Waste Connections a place where employees wanted to be instead of where they had to be.”

During the initial period of creating a servant leadership culture, WCN’s share price went from around $10 per share to over $18 per share. WCN’s current share price now sits above $100, a ten-bagger over the last 15+ years.

When a company’s share price goes up 10x in 10–15 years, the obvious reasons are excellent revenue growth and margin expansion. However, Andvari always looks for the reasons behind the reasons. In many cases, we find the qualitative aspects are the real enablers of excellence.

Bossidy instilled a culture of total quality at Allied Signal. Mittelstaedt instilled a culture of servant leadership at Waste Connections. Both CEOs aggressively promoted and protected their respective cultures. As WCN stated in its 2017 annual report, “Companies that win with Human Capital deliver over the long term.”

Whether a company makes auto parts or picks up your trash, culture is a key factor in whether they will be an average company or an outstanding one. We are on the hunt for names like these to own.

Click here for part 1 of this mini-series on Allied Signal/Honeywell (HON).

Once every two weeks, Andvari shares insights on great companies, exceptional leaders in business, and related topics in a digestible email format. Click here to sign-up.